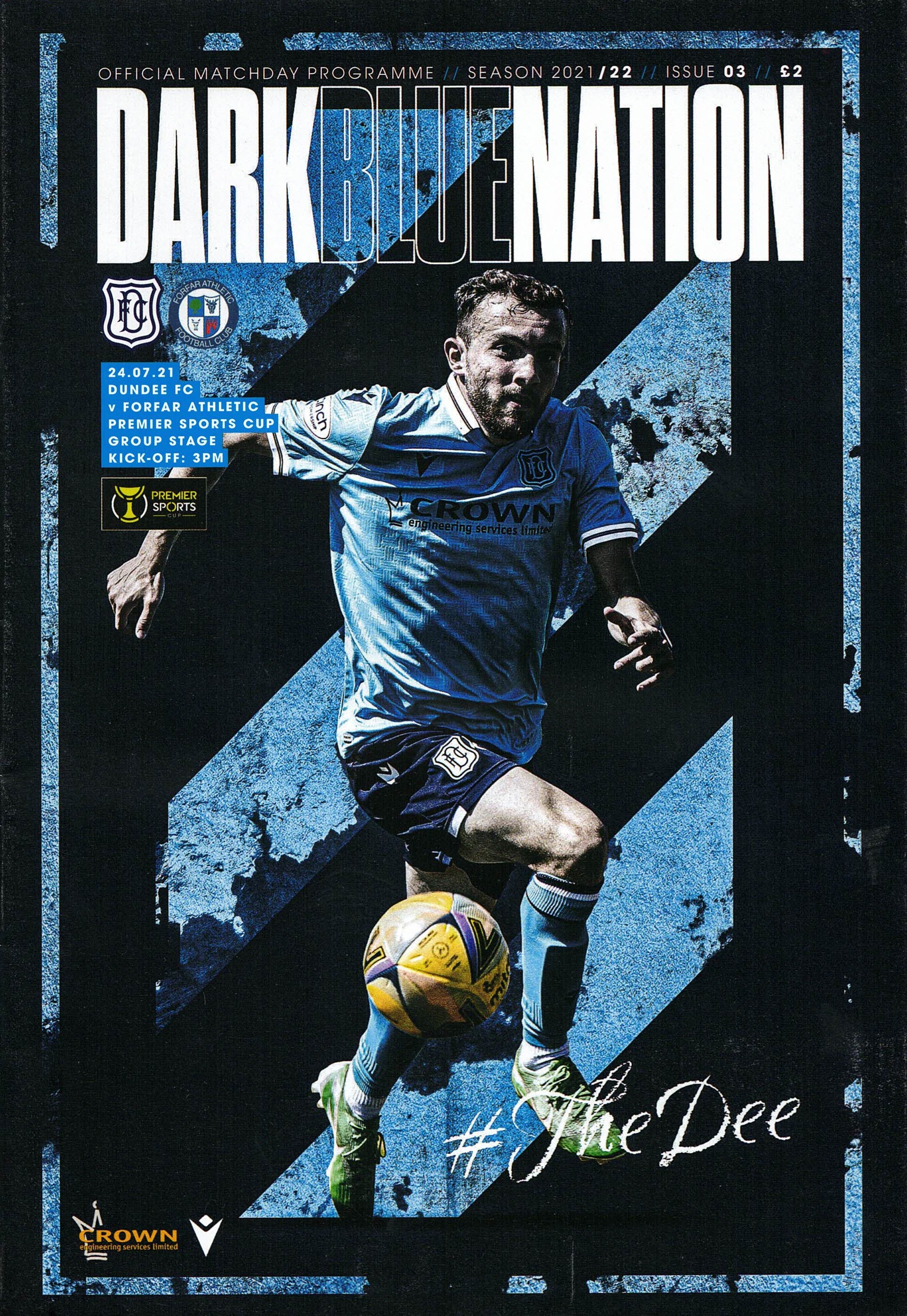 Dundee overcame disruption through Covid and injuries to record an entertaining 5-2 win over Forfar Athletic and secure top spot in the Premier Sports Cup group C. Charlie Adam, Corey Panter, on his debut, and Christie Elliott gave the Dee a three goal lead at half time. Forfar twice managed to pull a goal back in the second half but each time Jason Cummings restored Dundee’s three goal lead.

The Dark Blues had to make six changes from the team that beat Montrose on Wednesday. Four of the six replacements were used as substitutes in that game and James McPake still had the players to set up a formation he wanted with nobody having to play out of position. Christie Elliott, Corey Panter, Fin Robertson, Max Anderson, Jason Cummings and Danny Mullen all started, replacing Cammy Kerr, Jordan Marshall, Shaun Byrne, Jordan McGhee, Paul McGowan and Alex Jakubiak.

The Dark Blues took charge from the start and sent an endless wave of attacks towards the Bob Shankly Stand.

Charlie Adam had the first goal attempt from a free kick wide on the right. Instead of crossing he tried to sneak a shot in at the near post but Mark McCallum reacted quickly enough to push the ball round the post.

Forfar were doubling up on Paul McMullan, but the tactic backfired. The Dark Blues winger mixed up his game, often moving inside as well as attacking down the right. That made space for other Dees to exploit.

In the first 10 minutes Paul McMullan, Max Anderson and Christie Elliott all raced into space behind the left of Forfar’s defence.

After 13 minutes the pressure told on the Loons. Paul McMullan sent Jason Cummings into space on the right and his hard, low cross found its way through to the back post where Charlie ADAM scored easily.

Shortly after the goal Dundee had to reorganise when Liam Fontaine limped off. Declan McDaid replaced him, taking up the left back spot with Corey Panter moving to centre back.

The Dee youngsters in midfield both had a fine game. Max Anderson repeatedly showed neat footwork and strength to keep moves flowing. Fin Robertson was clearly enjoying the responsibility and opportunity to demonstrate his passing ability, and also his finely judged tackling.

Clever close control by Anderson set up a shooting opportunity for Cummings, but the fierce shot from 18 yards was gathered by McCallum.

A lovely move started by Robertson’s long pass out to the right ended with Adam hooking a shot over the bar. Yet another dangerous attack down the right allowed Robertson to shoot from the edge of the penalty area but he pulled his shot wide.

It was no surprise when Dundee scored again shortly after the half hour mark. Declan McDaid’s corner from the left reached Jason Cummings, who set up Corey PANTER to smash home his first goal for the Dee in his first game.

The Dark Blues were forced to make another substitution when Charlie Adam left the park with Paul McGowan taking his place.

Forfar also had to make an enforced change when they lost centre back Michael Travis to injury. Ex Dee, and Deefiant hero, Gary Irvine came on to a round of warm applause from the home support.

Late in the half Dundee scored again. The Dark Blues ripped open the left of the Forfar defence once more. Christie set Cummings free to play a low cross though the goalmouth. No-one got a touch and McDaid fired the ball back across goal. ELLIOTT had continued his run and was on hand to stab in the third goal.

After half time the Dark Blues picked up where they had left off. The Dee battered relentlessly at the Forfar defence but couldn’t find the goal their approach play deserved. Frantic blocking denied Mullen and McDaid when goals looked certain.

Forfar had the occasional promising attack but it was very much against the run of play when they pulled a goal back after 61 minutes. Dundee were caught short-handed at the back and Craig Thomson worked his way round Paul McGowan and crossed to the near post for Stefan McCLUSKEY to score from close range.

The Dark Blues then resumed their assault on the Forfar defence. Cillian Sheridan came off the bench for his debut, replacing Danny Mullen.

Max Anderson’s energy and movement in midfield was a constant problem for Forfar. The young midfielder was continually threatening to break into the box and score. He seemed to have succeeded when Cummings set him up, but keeper McCallum somehow managed to push Anderson’s shot round the post.

The Dark Blues were always the more dangerous side but Forfar knew that they had a chance of qualifying as one of the best placed runners up if they could narrow the goal difference. The Loons didn’t give up and took every opportunity to attack.

After 73 minutes Dundee won a penalty when a fine Robertson pass allowed McMullan to run at the Forfar defence. Instead of hitting the line he cut inside andc swapped passes wth Anderson before being bundled over by Archie Thomas. Referee Grant Irvine pointed to the spot and Jason CUMMINGS scored emphatically.

McMullan had a low drive saved after he had been sprung into pace by a wonderful pass from Robertson, who had won possession with a fine tackle.

Ten minutes from time Forfar pulled another goal back. Corey Panter slipped, or was possibly fouled, in the byline under pressure from Matthew Aitken who was able to run in and tee up substitute Grant ANDERSON to score from a couple of yards out.

Forfar kept trying to reduce the deficit and boost their goal difference, and Lee Ashcroft had to head a dangerous cross from Grant Anderson past his own post.

However, the Dee didn’t want to close the game down and kept hunting a fifth goal. After Cillian Sheridan broke down the left Fin Robertson went close with a shot that was deflected inches past the post.

Jason Cummings chased a through ball, rounded the keeper, but lost his balance giving the covering defenders time to get back and turn his shot out for a corner. That delayed the fifth goal by only a few seconds. McMullan flighted the corner to the back post and CUMMINGS headed home the final goal.

The Dark Blues supporters were treated to seven goals in a highly entertaining game. There could easily have been more goals. Forfar’s defence was regularly dismantled in open play, but when the ball was in the penalty their defenders threw themselves in the way to block time and time again. The Loons willingness to attack Dundee rather than try to keep the score down in the second half guaranteed excitement at both ends.

The Dundee team might have been badly disrupted today, but there was much for the fans to enjoy. The two youngsters, Max Anderson and Fin Robertson, enthusiastically took the chance to show their talents. Dundee were always dangerous in attack and the clever movement and passing created endless opportunities.

The Dark Blues are now safely through to the last 16 of the Premier Sports Cup and wait to see who they will meet in Sunday’s draw.