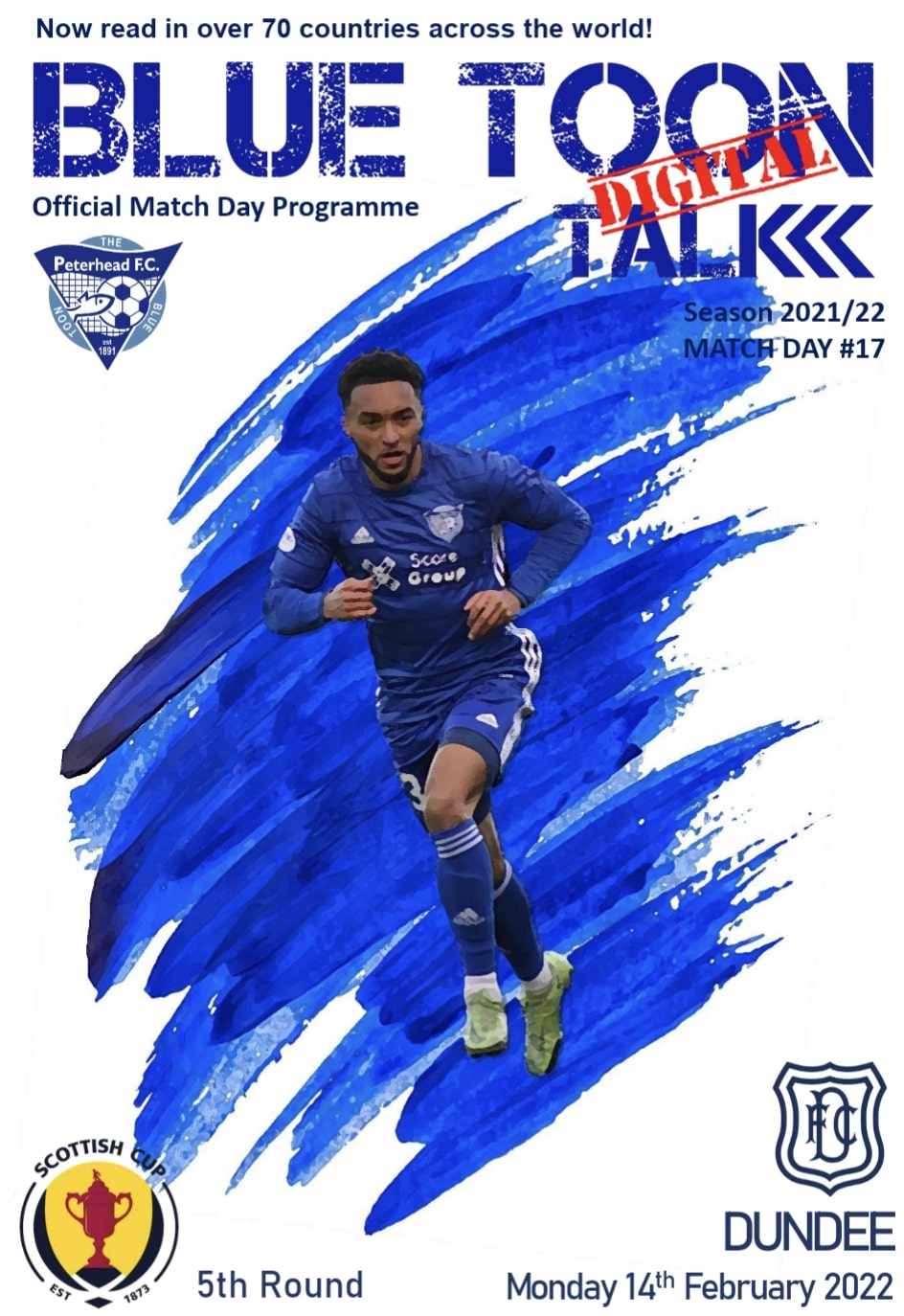 A 3-0 win at Peterhead sent Dundee into the quarter finals of the Scottish Cup where they will face Rangers at the Kilmac Stadium. A Charlie Adam penalty allowed the Dark Blues to reach half time with a 1-0 lead they hardly deserved. Niall McGinn’s first goal for the club early in the second half gave the Dee some breathing space. Josh Mulligan chipped in with a late third, also his first for the Dark Blues. The scoreline might look emphatic, but Peterhead were excellent and had Dundee on the rack at times. The Blue Toon will rue their poor luck in a first half when they struck the inside of the post and had a remarkably strong penalty claim turned down.

The Dark Blues made three changes from the team that beat Hearts last Wednesday. Zeno Ibsen Rossi came in for his debut in central defence. Max Anderson and Nial McGinn, the substitutes who were used on Wednesday and involved in the winning goal, came back into the starting eleven. Liam Fontaine and Josh Mulligan were on the bench, and Zak Rudden was cup tied.

The Blue Toon had the better of a first half that took a while to get going. The home side were the first to threaten. Scott Brown’s 20 yard shot was well saved by Ian Lawlor. Peterhead worked a short corner but Niah Payne didn’t connect cleanly with his shot, allowing Lawlor an easy save.

Dundee had more possession, but couldn’t put any worthwhile moves together in the first half hour. A Peterhead goal was far more likely than a Dee breakthrough, but that’s not the way it panned out.

At last Dundee put a slick move together. Paul McMullan won possession on the half way line wide on the right. Max Anderson moved the ball on for Niall McGinn to flick a pass behind the Peterhead defence and send McMullan clear. Home keeper Brett Long raced out and opted to tackle McMullan with his feet. He was late and nailed the Dee winger painfully for a clear penalty. After a delay for treatment to McMullan Charlie ADAM sent Long the wrong way from the spot for his first goal of the season after 33 minutes.

The goal should have settled the Dark Blues but they needed two remarkably lucky escapes to reach half time with a clean sheet.

Niah Payne managed to reach the byline and screwed over a cross for Hamish Ritchie to take a first time shot from 12 yards. His effort struck the inside of Lawlor’s left hand post, spun across goal and out for a goal kick on the other side.

The Dee were even more fortunate a few minutes later. Lawlor took a poor touch from a passback, slipped as he tried to recover and bundled Ryan Duncan over. There are penalty claims when the defending team’s supporters look anxiously at the referee to see what the decision is, and there are claims when the fans just look at the sky sadly and swear, knowing what the outome will be. This was in the latter category. Remarkably, referee David Munro let Lawlor off the hook and allowed play to continue.

The Blue Toon had one final effort in first half injury time. Andy McDonald’s 30 yard free kick beat the wall but Lawlor was well placed to save comfortably.

The Dee keeper had a much tougher task to keep out the next Peterhead free kick shortly after half time. Grant Savoury curled his shot from 22 yards over the wall and on course for the top corner. Lawlor pulled off the save of the match to turn the ball away.

It was a vital save because Peterhead had started the second half on top. Cruelly for the home side the Dee hit them with a sucker punch, again against the run of play. However, Dundee’s second goal featured some top quality from a couple of veterans.

Cammy Kerr dug out a clearance from near the corner flag. Adam collected the ball and hit a magnificent long, diagonal pass over the Peterhead defence. McGINN’s first touch took out the last defender and he shot through Long’s legs to record his first goal for the Dee.

The Blue Toon kept going, putting the Dee under occasional pressure, but they were never the same again. From the second goal onwards the Dark Blues were able to manage the game well to the final whistle.

There was plenty of good football from Peterhead through the midfield, but the Dee slammed the door shut on them when they got to the final third. Payne had a good turn and shot from 20 yards that Lawlor pushed away for a corner, and Jordan McGhee had to throw his body on the line to block a worrying cross. These were the best moments the Blue Toon had in the last half hour.

Josh Mulligan and Luke McCowan came on for Shaun Byrne and Paul McMullan, and then Paul McGowan replaced Charlie Adam. The changes did not disrupt the Dee who looked increasingly comfortable the longer the game went on. Five minutes from time Danny Mullen took a painful knock to his back and was substituted by Christie Elliott.

As the game was drifting to a conclusion Dundee scored a third goal that put a very flattering gloss on the result. McGinn picked up the ball in midfield, and sent MULLIGAN away down the left to cut inside and curl a lovely finish round Long and inside the far post. This was also his first goal for the Dee, and it was against the club with whom he spent the first half of the season.

Cup ties are all about the result and getting through to the next round. In that respect the Dark Blues did well tonight, but they certainly rode their luck in a poor first half. During the first 45 minutes Dundee were sluggish, lacked creativity, and failed to impose themselves on the game. The second half was far better without being hugely impressive. It took two moments of real quality to kill off Peterhead.

This was a tough cup tie for the Dee and it could easily have turned out very differently. If the Blue Toon had enjoyed the luck Dundee had in that first half this could well have been a nasty shock for the Dee. Peterhead will take the plaudits, but the Dark Blues march on to a quarter final tie at home to Rangers.