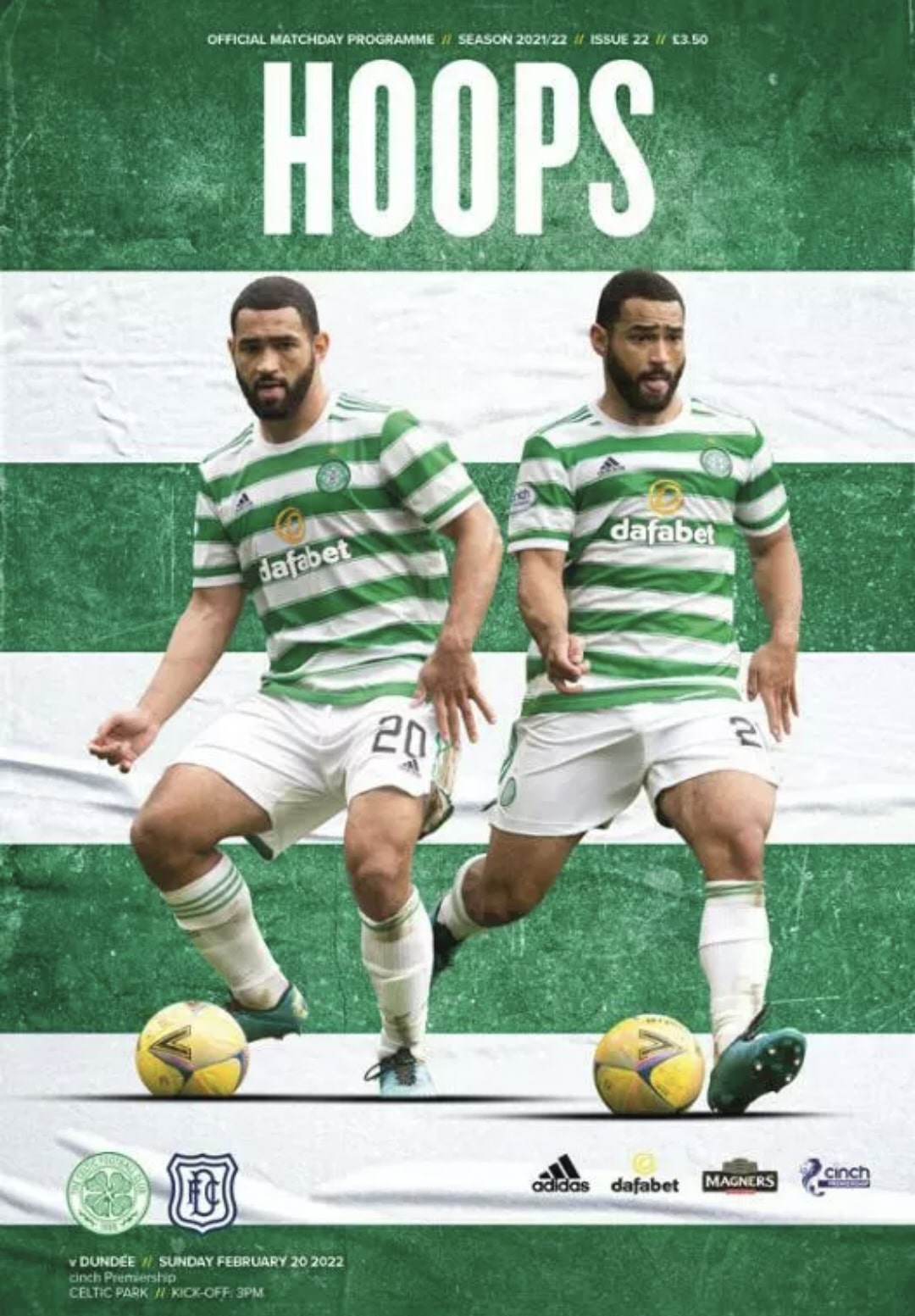 Dundee were disappointed to go down to a narrow 3-2 defeat against Celtic in Glasgow this afternoon in Mark McGhee’s first match in charge. The Dark Blues went ahead through Danny Mullen in the middle of the first half. Celtic responded with two quick goals by Giorgios Giakoumakis to give them a 2-1 lead at half time. Ryan Sweeney equalised after an hour, but Giakoumakis completed his hat-trick with a late winner.

Mark McGhee went for a 5-3-2 formation and made two changes to the Dee team that beat Peterhead in the cup. Vontae Daley-Campbell returned from suspension and Josh Mulligan retained his place after being a substitute on Monday. They replaced the injured Charlie Adam, and Niall McGinn, who was on the bench.

Celtic were on the attack from the start, putting the Dee under relentless pressure. However, the Dark Blues kept their shape, worked hard and made it difficult for Celtic to create any serious danger.

After 10 minutes Celtic worked a clever move down the right between Matt O’Riley and Callum McGregor, whose cutback was mishit yards wide by Giorgos Giakoumakis.

Celtic remained on top, dominating the possession, with almost all of the play in the Dee half. At times the home side’s confidence strayed over the line into cockiness with unnecessary flashy touches that took them nowhere.

The Dark Blues worked their way upfield twice to win corners and the second one paid off with a neatly taken goal. While the big central defenders were battling each other in the middle of the goalmouth Danny MULLEN peeled away to the back post and calmly tucked away Paul McMullan’s corner on the volley.

Celtic went straight back onto the attack after that setback and were ahead at half time thanks to two quickfire goals from Giorgios Giakoumakis.

After 34 minutes Jota crossed and Carl Starfelt flung himself into an acrobatic attempt on goal. He made a mess of that, but his ambition was rewarded by the confusion he created, allowing GIAKOUMAKIS to swivel onto the loose ball and shoot past Ian Lawlor from 10 yards.

The second half followed exactly the same pattern as the first. Celtic pinned the Dee back from the start, but the Dee kept their composure, defending well under fierce pressure.

Maeda wasn’t far away from reaching a Jota cross at the far post. Callum McGregor had a fleeting shooting opportunity inside the box, but fired over as Shaun Byrne closed him down quickly.

Dundee made two substitutions early in the second half, sending on Niall McGinn and Luke McCowan for Paul McMullan and Josh Mulligan.

The Dark Blues did not manage a serious second half attack until an hour had passed, but it brought an equaliser, from another set piece.

The Dee’s most dangerous moment in open play came two minutes later. McGinn’s clever reverse pass sent Max Anderson into the penalty area, and his cutback was turned over the bar by Mullen.

The clocked ticked on agonisingly slowly as Dundee continued to frustrate Celtic and deny them clear chances. The Dark Blues held out until the 86th minute when Celtic broke through to break Dee hearts.

Dundee tried to launch an attack, but lost possession midway inside the home half. Celtic raced straight back down the right and Ralston’s cross to the near post was met by GIAKOUMAKIS’s diving header. Lawlor had no chance; the Greek striker had his hat-trick and Celtic had all three points.

Zak Rudden replaced Zeno Ibsen Rossi for the three minutes injury time. The Dark Blues had a fleeting opportunity when Celtic’s slackness allowed Jordan McGhee to break into the penalty area. The defence recovered before McGhee could find the unmarked McCowan in front of goal.

The resulting long throw was cleared back to Cammy Kerr whose cross caused defensive confusion with the ball breaking off Jota’s outstretched arm. Referee Gavin Duncan decided that was not worth a penalty and blew the final whistle.

The loss of a late goal was a sickener for the Dee, but the performance offered plenty of encouragement for the battle ahead. The game plan was effective and almost paid off. The team kept its shape and the Dee defended well for long periods with all parts of the team putting in a hard shift.

Dundee always looked capable of snatching a goal from set pieces. Indeed they were more dangerous in that respect than Celtic, with far fewer opportunities.

The last two games were daunting prospects, with visits to the clubs sitting third and first in the Premiership. Three points, with four goals scored and four conceded is better than most critics would have predicted. The Dee now face three home games in eight days and they go into this vital spell knowing that they can be competitive against anyone in this division.